On April 14th, 2021, Morris P. Hebert was presented the Louisiana Society of Professional Surveyors (LSPS) Life Membership Award. The award is presented to members of 25 or more years who have actively contributed to the growth of LSPS during their career and who have an outstanding 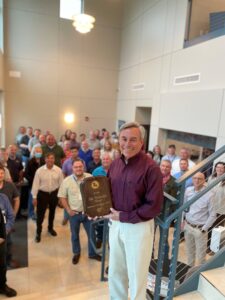 reputation for their knowledge, integrity, and professional competency. Mr. Hebert is the founder and Chairman of the Board of the company that bears his name, Morris P. Hebert, Inc. (MPH). The presentation ceremony was held at the MPH Corporate Headquarters and was attended by his wife, Sandra, and their children, as well as MPH employees and some of his former colleagues in the profession. The award was presented by former long-time employee and friend David Cloud.

Mr. Hebert began his surveying career in 1966 while attending Nicholls State University. He first joined LSPS in 1976 and served as President of LSPS District 2 for several years in the mid-eighties. In 1988, he was elected President of LSPS and received the President’s Award for Outstanding and Dedicated Service in 1989. In September of 1990, he was nominated by LSPS and appointed to the Louisiana Board of Registration of Professional Engineers and Land Surveyors by former Louisiana Governor Buddy Roemer. During his six-year tenure on the board, he served on numerous committees of the Board. In 1996, he was honored with the LSPS Surveying Excellence Award and in 2001, received the LSPS Presidential Citation in Recognition of Outstanding Services.

Since beginning his career as a Professional Land Surveyor, Mr. Hebert has supported the development of the surveying profession in Louisiana. In 2013, he was presented with a Certificate of Appreciation from Nicholls State University for Contributions to the Continuing Development of the Geomatics Program from 2003 to 2013. Additionally, Mr. Hebert was instrumental in the creation of the Geomatics Program and having it located at Nicholls State’s campus in Thibodaux, LA.